Google announced that it has rolled out a `January software update` to all supported Pixel devices running Android 13. Starting from Tuesday, the rollout will “continue over the next few weeks in phases depending on carrier and device”, the tech giant said in a support page. Users will get a notification once the over-the-air (OTA) becomes available for their devices.

The January 2023 update also includes bug fixes and improvements such as in `Display & Graphics` and `Biometrics`. Last month, Google rolled out new features to Pixel devices, including new security and privacy settings. With these features, users were able to review their security and privacy settings, risk levels, and other information all in one place, making it easy to protect their phones, accounts and passwords.

The monthly Android Security Bulletin is usually posted on the first Monday of each month, but the first Monday of January 2023 — i.e. January 2nd — was the day that many American workers observed the country’s New Year’s Day holiday. It’s because when a U.S. federal holiday falls on a weekend, most workplaces observe the holiday on the closest weekday instead. Thus, Google moved the release of the January 2023 ASB to today, and now the latest security update is rolling out to Pixel phones.

There are 20 issues resolved in the Android 13 January patch dated 2023-01-01 and 40 for 2023-01-05. Vulnerabilities range from high to critical, with the most severe relating to the kernel and vendor components.

Notably, patches for these vulnerabilities have been in the works for a few weeks or months now and are only now being disclosed. For more information on how the monthly Android security update process works.

we got some great news with a preview of new features that would be popping up on Android, Wear OS, and Google Photos. Now, Google has shared details of what to expect with its latest Pixel Feature Drop. That means you can expect new features for your supported Pixel handsets and, for the first time, new features for your Pixel Watch too.

One of the first things that Google highlights about the new Pixel Feature Drop is safety, and for a good reason. Over the past couple of years, safety and privacy have become big concerns for users as more and more services become intrusive. Pixel 7 and Pixel 7 Pro users can now access VPN by Google One for free, giving them network-level protection regardless of the app or web browser being used. While this can be used at home or the office, it is especially useful when in a public space using a public network. 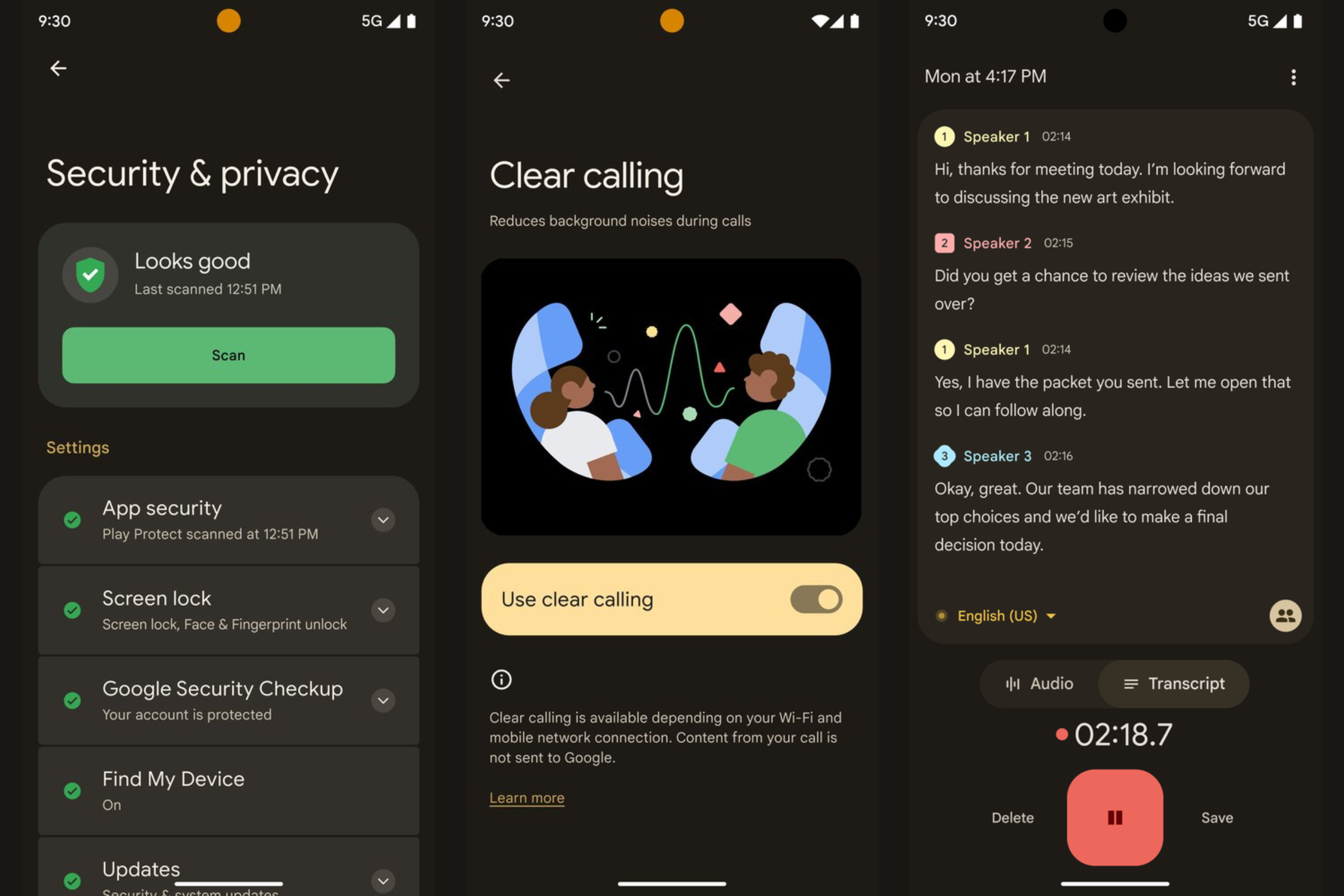 Furthermore, users will have access to new action cards that will share any security risks that might be present on your handset. In addition, checking on these settings will be easy, as they will all be located in one menu going forward. For Pixel 7 series users, Clear Calling will now be enabled, giving users a better calling experience regardless of the environment. The Pixel 7s will enhance a caller’s voice while, at the same time, suppressing background noise. According to Google, this can be accomplished thanks to the all-new Tensor G2 processor.

Google’s Pixel Recorder is getting an upgrade. While it previously could record and transcribe conversations, it is now capable of labeling speakers in the conversation, giving users a cleaner chat transcript. While it won’t automatically enter names for you, each person that is labeled, for example, “Speaker 1,” can be changed at a later time to a proper name. Furthermore, all of this will take place on the fly, making it easy and convenient.